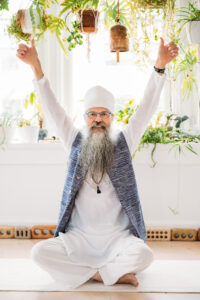 What is Kundalini Yoga?

Classical yoga, including Hatha Yoga, emphasizes asanas, or postures and its purpose is to raise the consciousness. Kundalini Yoga has a similar purpose, yet was designed to get you there more quickly.

In ancient times it was designed not for recluses but for those who lead busy lives, tending to families and jobs. Kundalini Yoga includes many of Hatha Yoga’s asanas and is effective, efficient and easy.

Kundalini Yoga balances the glandular system, strengthens the nervous system and harnesses the energy of the mind and emotions so you can control rather than be controlled by your thoughts and feelings. The mind is considered the link between the body and spirit, and this process is aided through yoga and meditation.

Benefits of Kundalini Yoga include:

Contact Nirmal to book your class or class series

Sat Nam,
The Kundalini Yoga practice is based on the teachings of Yogi Bhajan, who emigrated from India to Canada (briefly) in 1968, and moved on to Los Angeles in early 1969. Over the course of 35 years, he taught extensively in the US and around the world, until his death in 2004. Nirmal Singh is a teacher and lead trainer in the practice of Kundalini Yoga. His yoga journey began in 1995, then teacher training in 1999, and has continued evolving to this day.

In early 2020 a book was published by Pamela Dyson, “White Bird in a Golden Cage – My Life with Yogi Bhajan”, which shook the KY community since it included ethical breaches by Yogi Bhajan that are an important part of this spiritual practice. While difficult to comprehend this spiritual teacher’s conduct, we believed Pamela’s story which began a process for many in our practice of deep reflection regarding this spiritual teacher, and of these yoga teachings which we deeply appreciated. Over the months that followed more survivors came forward with claims of sexual misconduct by Yogi Bhajan, with the result that a 3rd party organization, An Olive Branch, was hired to investigate and report on this. (Click link for full report).

While many stories from survivors were shared in social media over these past few months, the depth of Yogi Bhajan’s sustained, horrific misconduct, captured in the report, was still shocking and saddening. That it was kept hidden so well for so long was also shocking and saddening. Our hearts goes out to the survivors who bravely contributed to this investigation, and to all others affected in any negative way by Yogi Bhajan or by this community’s practices over the years.

On a personal level, Nirmal shares that his life has benefited greatly by the kundalini yoga technology, and has witnessed the positive transformations it’s held for others as well. And so The Wellness Path will continue to share this yoga technology as it was taught, in a way that feels authentic and can be received by others who are interested. The KY organizations have committed to take the necessary steps to do right by the survivors, and to shift into a more transparent, inclusive, compassionate way of being in this aquarian age. This process has already begun to take shape, and we will remain vigilant that the organizations responsible follow through as promised.

For teachers, students and other practitioners affected by these revelations, there are a number of services offered by 3HO to help in the healing process. For our part, if we can be of assistance, please reach out to us.

February 3, 2021 Update – Just Outcomes
In November 2020, the KY organizations hired Just Outcomes, a team of specialists in restorative justice, to conduct a Compassionate Reconciliation Process for survivors affected by Yogi Bhajan or the community organizations. In this update, they share the process and their progress.